13 Hellish Facts About Demons That No One Told You About 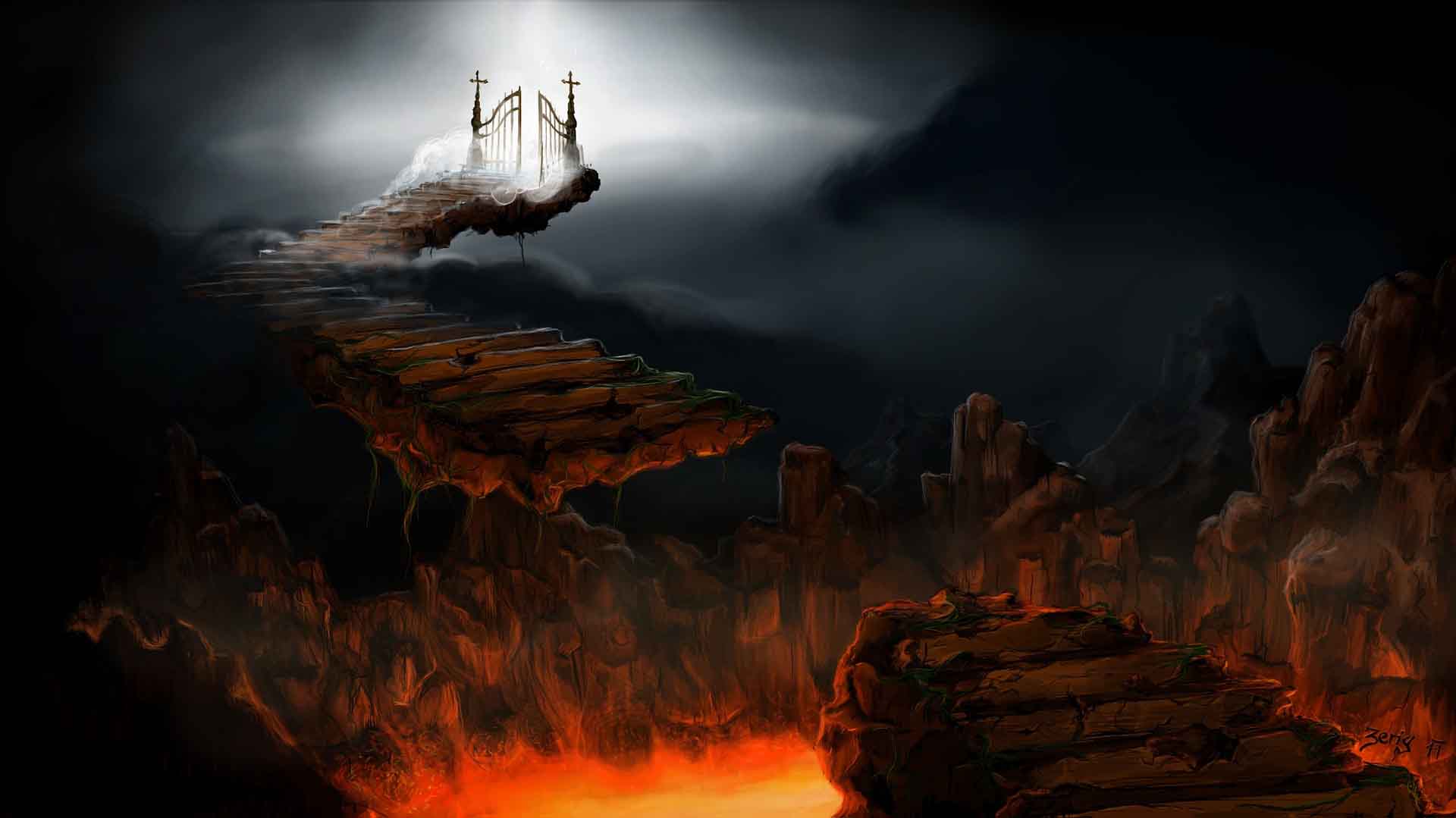 The meaning of the word demon comes from the Greek daimónion meaning “replete with wisdom”. The daimónion’s were both good and bad. However, they have always been considered as supernatural, mythological and malevolent beings prevalent in religion, occultism, literature, fiction, mythology, and folklore.

Demons are portrayed in scary supernatural stories with subjects that span from vampires to zombies.

Like angels, demons are spirit-beings which means they do not have physical bodies.
Demons are considered as fallen angels in Christianity who have rebelled against God, sent them to hell, putting them in chains, held in darkness to be held for judgment.
In Arabic folklore, it was said the Djinn (originally genies, who granted wishes but over time are associated) with demons, inhabited the Earth originally. They were forced out by God for humanity and have ever since been at war, wanting to take their land back.
They think, reason, and have the will to make good and evil choices. In many biblical scenes, demons speak with cunning or hostility, indicating their intelligence. They also willfully torment, deceive, harass, and attack humans.
In Arabic mythology, Demons can be seen as a pure energy source or gods in their on right.

2. What Is Their Purpose?

Since demons are considered to be evil, they use their power to bring pain and misery into our lives.
Demons can be seen as a single pure energy sources with names representing human characteristics. They can also be gods with divine power.
Demons are present on earth to interfere in human affairs to work out their evil ways.

3. Demons Were Not Created Evil

Demons chose to rebel against God where they were immediately cast into hell and bound in chains for eternity.
However, demons must have access to our world or we would not be warned against them.

The term Devil comes from the Greek “diabolos” which in turn translated from the Hebrew word Satan. The concept of the Devil as archfiend of evil developed slowly over many centuries.
The Devil also known as the Dark Lord, Lucifer, Morning Star is the ruler of demons (in Christianity).
All demons serve the Devil.
The Devil is the counterpart of God and represents darkness, chaos, suffering, the absence of light and goodness.

The worshipping of demons is known as Demonolatry. Which is a modern polytheistic (belief in more than one god) religion, which involves calling demons as an energy force to help in spiritual growth and self-knowledge.
This is also the projection of one’s will onto an object or person, through ritual magick (magic).

6. How To Get Possessed By A Demon

Demons have the ability to possess humans (adults and children included), animals and buildings.
There are a variety of reasons why a demonic possession occurs such as:
– Using rituals or grimoires(spells). Occultists (witches, witch doctors, warlocks) have used grimoires, to call demons quickly as they have many powers. They can be invoked by combining the name of demons in a ritualist pattern.

– Being under the influence of a curse, which can be conjured up by spells or using occultists.

– Playing with devices such as an OUIJA board. An OUIJA is said to open a portal to the spirit world and can let all beings enter our world.

– Offering pact with the devil such as offering one’s soul for riches, offering a dedicated child, making animal sacrifices.

Not all demons are allowed to kill the people they possess but only to torture them. Having said that the those who has been possessed (also know as demoniac), may wish to take their own lives to end the agony.

They can be shapeshifters, which means they can take any form they wish from humans, animals or a mixture of both.
Demons have been known to take forms such as locusts and frogs.
Demons are non-human entities.
Since they are spirit-beings, they can be invisible to humans, but visible to other spirit beings.  Demons do not cast a shadow, they eat and drink like humans and are also described as unclean, dirty, smelly and live in dead bodies.

9. More Demons Than You Realise

There are over seven thousand demons, all of which have a very intricate and hierarchy structure, which is managed by 72 princes. This organised structure offers military precision and strict rules so much so, if a lower demon disobeys his superiors they will be punished (beaten).
There exists a structure comprised of 6 levels or “orders.”
– Lower level
These are elf-like demons (Vinftmo chore) who are harmful but not manovalent.

-First order
They are known as the “Fiery Ones”(Leliureon) who inhabit the air near the sun.

-Second order
These are “Air” demons (Adrea) occupy the space in the air, closest to humans. They are considered vain and think of themselves as God-like. They encourage people to be conceited and vain.

-Third order
These are the “Earth Demons” (Terro). They make people believe in immortality and put crude thoughts into people’s minds.

The worst and most dangerous demons are in the fourth through sixth orders.
–Fourth order
These are water demons (Acquatile or Marino), who live in lakes, seas, and rivers, where they enjoy causing storms and sinking ships.

-Fifth order
These include subterranean demons (Sotterranei), who cause suffering to miners, start earthquakes, destabilize the world, and throw stones. They are cruel and enjoy tormenting people. The Sotteranei disguise themselves as servants of magicians and sorcerers.

-Sixth Order
The Lucifogo are the most deadly. They are dark, mysterious and keep away from light. They will kill people in cold blood and should be avoided at all costs.

10. Prevention Better Then A Cure

To prevent demons possessing individuals, certain methods of protection can be used, including:
–Amulets made out of crystals (Tourmaline, Quartz) and natural stones.These are attuned with sayings, spells or prayers.

–Metals including iron and silver.

–Bells, in bell ringing, are used in many cultures, to awards off demons or evil spirits.

–Salt, in doorways or entrances, is used to repel demons. Salt is a preservative and is used in health.

–Running water– crossing streams with running water will stop evils spirits. Houses with bathrooms or kitchen will not be possessed by demons so long as there is a water supply and can be turned on when needed.

–Saying prays, or chanting can ward off demons and is used in exorcism.

11. How Do You Know If You Are Possessed?

Some of the tell-tale signs include:
– Having super strength.

– Having convulsions and fits, including vomiting and urination.

– Talking in other languages, which the victim, may have never spoken before.

– Showing signs of fear towards sacred objects or the reciting of texts.

12. Getting Rid Of Demons

Demonization is a terrible thing. Someone who is demonized deserves our compassion. Dark powers have such a hold on the person that they no longer have the ability to control themselves. Is there any hope for such misery and bondage?
Demons can be ousted from their control over someone. The word most associated with this action is an exorcism.
What is exorcism? The Greek word for exorcise is to “extract an oath” and means expelling one or more demons from a human host. An exorcist is someone who possesses the power and authority to cast out demons. Demon exorcisms have been practiced for centuries in many world religions, including Christianity.

This a binding agreement with a demon.
The benefits of a pact include having riches, love, power, in exchange for one’s soul.
One method of conjuring up a demon for a pact is to sacrifice an animal (a cock) at the center of a crossroads and letting the blood flow out while saying a spell. A demon will appear, and an offer is made and an agreement signed in blood by the person who is saying the spell.
However, a pact can be broken with appeals made to the higher source, in Christianity such as Jesus or the Mother Mary.
The Devil keeps all the list of those who have made a pact with him in a black book called the “Devils book.”

References
Bible: New Testament (Book Of Revelations, Gospal According To Matthew)
The Encyclopedia Of Demons & Demonology
The Demons Of Deception- Corwin Hargrove
Demonology- Types Of Demons and Evil Spirits. Their Names & Activities
The Complete Book Of Demonolatry – S. Connolly
On the Operation of Demons: Psellus’ Dialogue – Michael Psellus
https://en.wikipedia.org/wiki/Demon

We Will Not SPAM You or Give Your Details Out